Most people don’t like Winter because it’s cold. Yet, there are still benefits and things to enjoy from this season. For example, during winter in Japan, many Japanese people enjoy “鍋料理” (“Nabe ryori”, or “one pot meal”). Above all, “Fugu nabe” (Pufferfish pot) is the King of Nabe. But why do Japanese eat fugu? Let's find out!

The appearance of Fugu (Pufferfish, or Blowfish) is very interesting (there are more than 100 species, from about 2 cm to 1 meter!). Fugu (“河豚”) means “River pig”.

It’s a cute fish, and its smooth skin looks very tasty. Actually, its taste is very elegant. Eating Fugu is similar to admiring arts. One should enjoy all the parts.

“Tecchiri” (Fugu pot) has plenty of collagen and is thus a well-balanced food in terms of nutrition and beauty for women’s skin.

But just like a Rose has thorns, delicious Fugu dishes bear hazards. As you might know, Fugu contains a strong poison.

But most fugus served in restaurants are still of the natural kind, requiring thorough preparation. That's because the toxin (namely tetrodotoxin) can kill people – each year a few die because of that.

Let it be known: pufferfishes are one of the most poisonous animals. As a matter of fact, that poison is 1,000 more deadly than cyanide, with no antidote.

The toxin has an effect on the nervous system, paralyzing victims and preventing them from breathing.

The poisonous parts (liver mostly) depend on kinds and places of origins of the fugu. Even though there are several ways for eating Fugu, the most adventurous one will be “Fugu no Nukazuke” (paper thin sliced, delicious with sake).

“Goma Fugu” (one kind of Fugu) has a strong poison in its ovary, but after some authorized companies pickled it in a fermented medium of rice bran and brine for more than two years, poison magically disappeared. Scientists haven’t elucidated this mystery yet.

There’s history about eating Fugu. In the Edo era, everybody knew the wonderfulness of Fugu dishes. In close groups, nobody could avoid eating this tasty but dangerous food. Only married men were allowed not to take part in Fugu Nabe party.

Otherwise, men were regarded as cowards. In modern times, in order to cook Fugu appropriately, “板前” (“Itamae” – chefs) have to get a licence from prefecture.

Despite all the precautions required to prepare a fugu dish, one can eat such a meal starting at about $30 only (€25).

The best season for eating Fugu is generally from the end of January to the end of March. After the Fugu season, spring comes and so do “初鰹” (“Hatsu Gatsuo” – First skipjack tuna). This endless cycle of food is one of the happiest things about living in Japan. 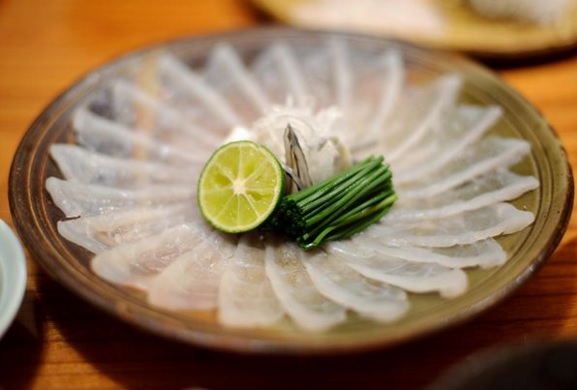 Fugu shashimi … It looks yummy but would you eat it?

Why Ask an Agent to Help you Come Study in Japan?

Is life in Japan Expensive?