The Two Types of Sushi: Hayazushi and Narezushi | Motivist Japan

While everyone knows about sushi, most foreign people may not know that there are various kinds of Sushi in Japan. To simplify, kinds of Sushi can be divided into two types: “早鮨” (“Hayazushi“) and “なれ鮨” (“Narezushi“).

“Hayazushi” is made from fresh fish with vinegar-tasted rice, and prepared by grasp of palm. So “Hayazushi” is also called “Nigirizushi” (“Nigiru” means “Grasp”).

As you might know, “江戸前鮨”  (“Edomaezushi”, “Edo” is the old name of Tokyo, “Mae” means “front”, so “Edomae” means “In front of Edo”, that is, Tokyo Bay”) is the symbol of “Hayazushi” and another name of “Nigirizushi”. When we say simply “Sushi”, it usually means “Edomaezushi”. 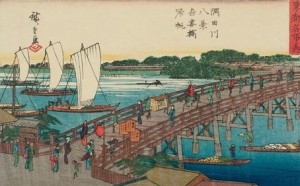 Because “Edoko” (which literally means “Tokyo children”) were generally short-tempered, they were in a hurry even for meals. That's how “Hayazushi” was invented in Edo.

(The same thing could be seen in their custom of taking bath. Edokko preferred very hot water in order to make dipping time shorter).

It was at about the same time that vinegar became wide-spread among ordinary people. To fish from the Tokyo bay, to prepare the meal quickly, and to eat it fast, this style became very popular in Edo town.

On the other hand, “Narezushi” has a very long nationwide history in Japan. It was originally invented to preserve the meat of fish and wild animals, using salt and rice. To cook “Narezushi”, one has to use lactic acid fermentation. Thus its special taste.

In order to become a skilled sushi chef, it used to be said that one had to train to “boil the rice for 3 years, to grasp it for 8 years”.

So according to that adage, it requires more than 10 years to become an independent, skilled sushi chef. Once upon a time, “通”  (“Tsu”) (“connoisseur”) had to start to eat with eggs.

Because to cook eggs is simple but needs certain skills so guests can judge the grade of chef. But recently most sushi restaurant buy ready-made one. So “通人” (“Tsujin”) complain about the present situation.