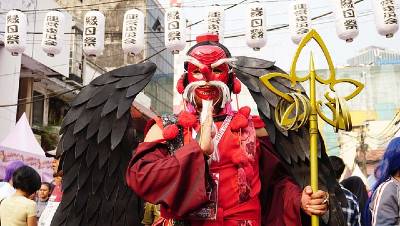 The word Yokai (妖怪) has a lot of meaning. It can mean a ghost, phantom, demon, monster or goblin. Yokai usually refers to mystical creatures that possesses unexplained powers, physical characteristics or strength. In the early centuries, yokai was not about the monsters but strange phenomena that cannot be explained. This was later on compiled in various books and literature. However it did not include a visual representation of the yokai.

During the medieval Japan, the emakimono (picture handscrolls) started giving the yokai a face though mainly used for entertainment. From Edo period to Meiji Period, yokai appeared in different collection of tales and main subject of kibyoshi (illustrated storybook with yellow covers).

In Showa period, people refer to yokai in different forms such as tanuki (raccoon dogs), foxes and cats. Some region referred to yokai as a phenomenon such as Azukiarai, also known as the bean washer who sings produces a dreadful  sound that scares people and the ghost in the school toilet known as Hanako san.

Tengu means “heavenly dog” was driven from the Chinese word Tiangou a dog like Chinese demon. Their physical characteristics involve having  a human body with unusual long nose that resembles a beak. In Toriyama Sekien's Gazu Hyakki Yako, Tengu was described to be kite like monster because of their wide wings. 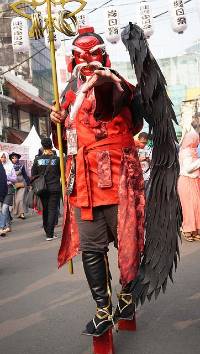 There are 2 types of Tengu; Daitengu and Kotengu (or Karasutengu). Daitengu is the one you often see in masks with long nose and red face. They wear robes and they have the power to possess human, fly and they are a  good swordsman.

Kotengu on the other hand refers to Tengu that is less superior to Daitengu. Considered as servers of Daitengu which are more “animal” in terms of behavior and characteristics. They are also known to eat humans and is easy to deceive.

Kappa means river child or Kawataro (河太郎) which translates to river boy. They are bluish or greenish in color. Size is about a small child with slime  and scales all over their body. They have webbed human like hand and feet that they use for swimming and staying in water for a long time. They have a bowl like thing on their head that stores water which says is the source of their power.

Kappa are known to challenge human in sumo match and at the same time they are very polite. So before starting the sumo challenge, if you bow to it, it will bow back to you which can work in your favor by hitting the source of its power.

Kappa are known to lure the human into the water and take their shirikodama to gain power. Shirikodama is a mythical ball that can be found in the anus.

Oni or Demon in English are one of the famous yokai in Japan. They are ogre looking type monster with horns on their head, fangs, red face and body and always carrying kanabo clubs.

Oni are known to be evil human beings who died and eventually became ogre looking oni in their after life. Their job is to torment and punish the souls of people who are bound to hell but did not make the cut to become oni themselves.

During Setsubun Festival in Japan, people throw roasted soybeans or also known as fortune soybeans in their door or to a person wearing an Oni mask while slamming the door after. They said this to keep the demon out of the house.

In Akita Prefecture, every year they celebrate Namahage. A traditional folklore portrayed by men by wearing scary Oni mask while visiting neighborhood houses to torment the kids who did not obey their parents. If the parent confirmed to the oni that their kid has been bad, the man portraying the oni will try to take the kid and bring them to the mountains with them (but normally will just take them outside of the house). This is to guarantee that kids will obey their parents or else they will be taken by the oni.

Kitsune or fox in English also played a major part in Yokai history of Japan. They are known to have impressive intelligence and magical powers. On top of this, they have the ability to possess the power of shape-shifting. They pretend to be a beautiful woman at night but sometimes unable to hide their tail.

They can manipulate dreams, bend the time and create illusions that is almost distinguishable from the reality.

There are 2 classifications of Kitsune; the Zenko and the Yako.

1. The zenko  is the fox that you see in Inari. They are treated as guards of Inari.

2. Yako is the mischievous fox or field fox.

Tanuki or Raccoon in English is one of the known yokai in Japan. Though they use the same shape-shifting abilities for tricking humans just like the Kitsune, they are also known in using their magical and huge testicles as a weapon, shield or something that they can use to terrorize the humans.

Different types of Noodles in Japan