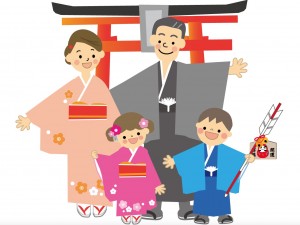 Here is a guide to know (almost) everything about Oshôgatsu (お正月), the Japanese new year – a very important time in Japan. As you will see, the weight of Tradition is particularly strong during this period.

Before Oshôgatsu, here is the way to wish people a Happy New Year: 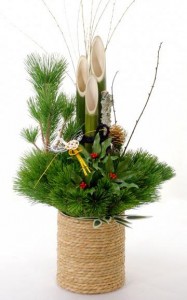 Preparations resume actually a few days before New Year's eve. First, Japanese people clean up their places (Osoji) in order to be ready to start the new year on good bases. Then they prepare the meals that they will enjoy the following days (see Ôsechi, below) – tradition says that one should not cook during the first 3 days of the year.

The house is decorated. For example, Shimekazari (しめ飾り), made of straw, paper and an orange, is clung at the entrance – it is supposed to bring prosperity. Shimenawa (標縄) is chord made of straw; it brings luck. There is also Kadomatsu (門松) (see on the right-hand side), made of bamboo, straw and pine, which symbolises longévity Kadom

atsu . Finally, the Kagami-mochi (鏡もち) is a round-shaped cake of rice. It is reminiscent of the shape of old-time mirrors, where gods reside.

During the holiday, many Japanese go back home. This is the reason why a city like Tokyo is deserted (all things 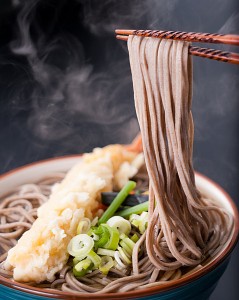 In the evening, an NHK TV shown is watched by tens of millions of Japanese. The most popular Japanese singers perform for more than 4 hours, until 11:45 pm.

Most often, Japanese people eat a bowl of toshikoshi-soba (年越し蕎麦). These long noodles are a symbol of longévity.

Around midnight, bells ring 108 times. Wherever you are, you will hear them. 108, as the number sins and temptations, according to Buddhist tradition. This is Joya no Kane. That time enables Japanese people to “purify” themselves. 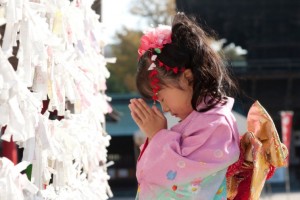 After the breakfast (see below), Japanese people often go to the temple or shrine (this is Hatsumode (初詣) – a visit that may also take place the following days). They pray to spend a good year, they buy lucky charms and they try to guess what's ahead thanks to Omikuji (pieces of paper that one chooses randomly). At the temple or shrine, it is also possible to eat or drink.

After the visit, some people go … shopping (see Fukubukuro). Of course, the main thing to do that day is to stay home and relax. 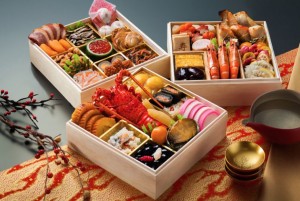 . They share numerous meals, chosen for their appearance or meaning (play on words), all ways to express the hope for a happy, healthy and prosperous year ahead.

For example « mame » – « black beans » – can also mean « health ». The lotus root (“renkon”) symbolises a clear and safe future since one can see through the hole of the vegetable, shrimps mean a long life (it is like an old crooked bearded man), fried eggs' gold mean prosperity, fish eggs fertility …

Every day, mochis (rice cakes) are served, either in the soup or grilled, with soy sauce. On the 7th, the « 7 spice » soup is served (nanakusagayu).

During Oshôgatsu one doesn't use the usual chopsticks but the Iwai-bashi (祝箸), with shaped endings on both sides. One should use only one said. The other is for a god. So be careful to use just one side!

Three cups are shared by the family. Each person drinks one after another, from the youngest to the oldest who then benefits from the others' “vitality”.

After the New Year

The way to wish a Happy New Year is to say “akemashite omedetô“. This is what one has to say when they greet people for the first time of the  year.

Obviously, kids really look forward to this custom … They receive nicely decorated envelopes (see on the right-hand side) containing money from their parents, grand-parents, uncles … While Japanese children may not get presents for Christmas, Otoshidama is the way for them to get money and perhaps buy the toys they have dreamed of.

A very important ritual consists in sending New Year (post) cards. If one 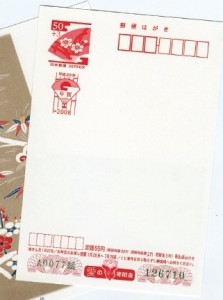 post them early enough, the Japanese Post (ever so efficient) commits to deliver on the 1st of January (yes, many Japanese work on the 1st of January). On the cards, one can read “Akemashite Omedeto Gozaimasu” and “Kotoshi mo Yoroshiku Onegaishimasu” (“thank you in advance for your support”).

The nengajo are a way for Japanese people to stay in touch which their friends whom they may seldom see. They often insert pictures of their families, as well as the year's Chinese zodiac sign (the rooster in 2017). Those post cards each bear a number. A lottery number. By sending cards, Japanese people can thus earn prizes, including spectacular ones such as travels.

Fukubukuro (福袋): The “Lucky Bags” from the Department Stores

Among the traditions, here is another mercantile side of this time. On New Year's day, department stores have sales and offer fukubukuro (“lucky bags”) full of unsold items. It is apparently appealing enough for many people to wait in line hours before the stores open.

Oshôgatsu is one of the most expected times in Japan. Filled with symbols, this period enables Japanese families to gather and make their ties stronger. Likewise, traditions maintain the cohesiveness of the Japanese society.

Is life in Japan Expensive?