If you ever decide to come study in Japan and experience the culture, you will less likely to be bored. There is so much to do. That’s because Japanese people are usually very curious to discover new things.

Japanese often say that their kaisha (company) is like a second family. Japanese employees spend a lot of time at the work place. In spite of that, people still give importance to leisure time. Japanese leisure is a reflection of society, influence from western culture and from ancestral culture. Here are a few activities that we are sure you will enjoy doing in Japan without breaking your budget.

Culture: From calligraphy to martial arts, there is so much to discover in Japan!

Living in Japan will undoubtedly open up opportunity for you to discover new activities and hobbies.

As you will soon find out, learning the Japanese language means much more than mere grammar and vocabulary. It is also about understanding an ancient and rich culture.

Hanami: When winter gives way to spring, Japanese people enjoy nature and most notably “Hanami”. “Hana” stands for “flower” and “mi” for “viewing”. Blossoming cherry trees (“sakura”) and plum trees make for beautiful sights in the numerous parks of Japan. People organize gatherings and picnics with family and friends under the flowered trees. It is really an important time in Japan. It is always anticipated season of the year that the Japanese media report the presumed dates of the blossoming and its peaks, region by region! 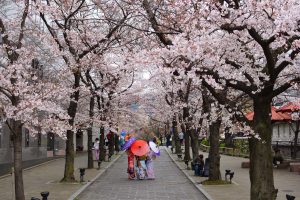 Ikebana: It is the art of flower arrangement. Some schools teach the techniques and rules of this spiritual art. It brings practitioners closer to nature (something that is very present in the Japanese culture) and contributes to well-being, the same way meditation does (another important feature of Japan).

Izakaya (and other restaurants): Enjoy Izakaya and discover dozens of small meals and new food to share with your friends while drinking beer. Eat Chinese, French, Thai, Italian, Korean cuisines for a modest price. Can you find more variety, quality and good prices all combined in other places than in Japanese cities?

Karaoke: Obviously one of the national pastimes, which explains the impressive number of Karaoke establishments you will find wherever you are in Japan. 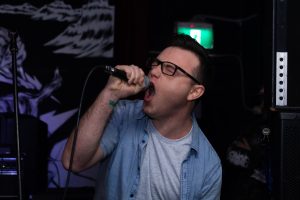 Anytime of the day (and night), rent a karaoke room with your friends, have meals delivered to you and have a blast singing on your favorite tunes. If you want to display your skills and would rather not restrain yourself to a booth, feel free to sing on stage!

Manga: Japanese people start reading manga in kindergarten. Manga has become a huge industry in Japan – and actually in many other Asian and Western countries as well. While hundreds of new books are published each year, Japanese people also like to read Manga Magazines. In those publications, readers follow series issue after issue. Manga can be about any topics and thus target all sorts of people, from all sorts of backgrounds. Japanese people enjoy going to Manga cafes (or Manga Kissaten) where they can just relax drinking while reading. In some manga kissa it is actually possible to stay all night long!

Nature: While the Japanese metropolises may overwhelm some, in Japan nature is never too far away. Mount Fuji can actually be seen from countless points in Japan – including Tokyo.

Akame-shujuhachi-taki (the 48 waterfalls of Akame), the National Park of Hakone, Aomori’s streams, the Mountains of Kamikochi.

Catch a Shinkansen (bullet train) and experience the Japanese countryside in no time. What is more peaceful than an afternoon in Kamakura or time at an Onsen (hot-spring) in the Prefecture of Gunma? 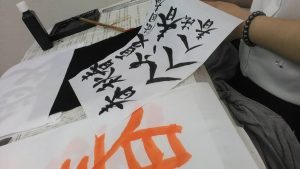 Shodo (Calligraphy): calligraphy is artistic writing, another ancient art that emphasizes and brings together highly valued traits in Japan: patience and preparation, calmness, and meditation. Shodo is actually closely linked to Zen. It is actually becoming more and more popular in Western countries. You should consider getting Calligraphy lessons.

Shopping: You will find in Japan some of the largest shopping malls of the world. Given the number of those “depato”, one may wonder if Japanese people may be the biggest shoppers around the world. Japanese people like to spend time in those huge malls which house not only shops but food courts and entertainment centers, seven days a week. 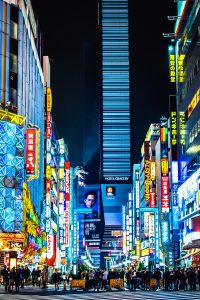 Photo by Erik Eastman on Unsplash

If your budget does not allow you to go shopping for expensive brands, do not worry. You can find all sort of products at all sorts of prices. And you will likely enjoy the “100 Yen shops” where you can find (almost) everything at the amazing price of 100 Yen (less than a dollar or less than a euro).

Sports: With the exception of sumo, Japanese follow the same sports as western people do. They love their J-League (the professional football/soccer) and Baseball (called Yakyu) is one of the most popular attraction. More people follow rugby, basketball and even American football, to name just a few.

Japanese people are generally quite sporty. They watch what they eat and they are very active. That’s why they are known to have the longest life expectancy in the world for both genders. Many people jog, play tennis, play golf etc. In Japan, you may play golf on the top of a building, go swimming in a Fitness center or decide to go skiing after work (skiing resorts are never far from big cities, Tokyo included). Japanese people enjoy sports and have plenty of opportunities to try and practice new ones. Even if you are in the center of a city, it will be very easy for you to lead an active life in Japan, if you want to.

Sumo: Japanese people love Sumo tournaments and follow them, 6 times a year. Sumotoris (the professionals wrestlers) are celebrities, just like football (soccer) players are in Europe, or baseball players in the US. A mix of full contact sport, martial art and ancient tradition, a day at Sumo Hall in Ryogoku (the most famous sumo place) in Tokyo is worth experiencing.

Tea ceremony: It originates from Zen Buddhism. Some Japanese people learn how to prepare the tea (matcha) and perform the ceremony according to various rules. You may want to attend such a performance and get a taste of Japanese traditional culture.

Traveling: from the gorgeous mountains of Hokkaido to the beaches of Kyushu, there are lots of wonderful places to discover in Japan. Thankfully, the transportation system is very convenient, thus enabling you to organize short trips very easily, by using the great Japanese railway network or by low cost carriers.

Although it will take a long time for you to explore the wonders of Japan, you may want to take the opportunity of being in Japan to also travel around in Asia: 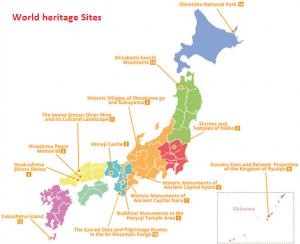