HomeBlogAll about Maiko, Geisha and Oiran

One of the famous representation of Japanese culture is the Geisha. Becoming a geisha requires a lot of training, hard work and patience. In the past, only Japanese can become a geisha. However, there were records of foreigners becoming geisha in Tokyo. In Kyoto, which is known for it's strong Geisha presence has no record yet of allowing foreigners to work in okiya as Geisha.

In this article, we would explain in full detail the difference between Geisha, Maiko and Oiran. Before a girl can become a Geisha, they would start first as Maiko.

WHAT IS A MAIKO? 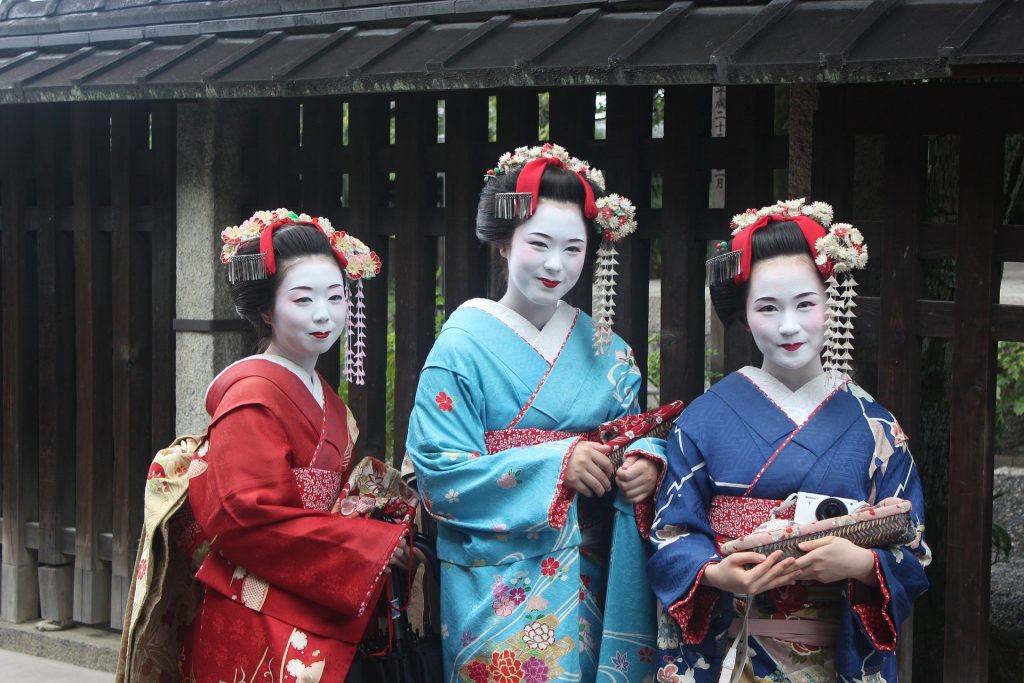 Maiko (舞子) directly translates to being an apprentice of geisha and dancing girl.

The Maiko training can last for up to 5 years. Most of the Japanese women start their training at the age of 15. There are lots of things to be considered when becoming a Maiko. In Japan, image is everything. As a Maiko, you are expected to act in a traditional way. Training to become a Maiko can last up to 6 months. This is called preparation term. The girls participating in the preparation term is called Shikomi san. If they pass all the tests within the 6 month period, then they become Maiko and work for the Okiya. Okiya is a geisha lodging house/drinking house that will act as their agency for training. Okiya is run by the okaasan of the house. Okaasan (Mother) is the term used for the person who runs the Okiya and manages the Maikos therefore will act like a mother of the girls hence, the term okaasan.

Even before they start the training to become a Maiko, the okaasan of the house will conduct an interview to check if the girl is qualified to undergo Shikomi training. If the girl passed the interview, she will be trained to perform traditional songs, dance, play music instruments like shamisen during the ozashiki (geisha gatherings) as well be in charge with different household chores.

While on training, shikomi san are not allowed to call or see their family. They can however send letters to them. As part of the training, shikomi san will be paired with their Oneesan (sister) who will act as their mentor during the training. Shikomi san on the other hand will assist the oneesan with make-up and clothing preparation every time the oneesan will go to the ochaya (tea house) to perform. Maiko is the term used in Kyoto while Hangyoku is the term used in the Tokyo area.

While they are on training, a Maiko does not use wigs. They use their own hair and style it according to their level. It is called Nihongami(日本髪). For the beginners, they will start with wareshinobu. Maikos cannot wash their hair for a week to maintain their hairstyle. They usually add some ornaments on their hair called kanzashi (簪) to complete the look.They use a special pillow when they sleep to maintain its shape.

A maiko wears a woven kimono. The style of kimono should show class and elegance. A maiko would own 10-15 pcs of Kimono that is appropriate for every season. If a maiko is part of an Okiya, they will have a kamon of it's owner's Okiya on their obi (belt) that is almost feet length. 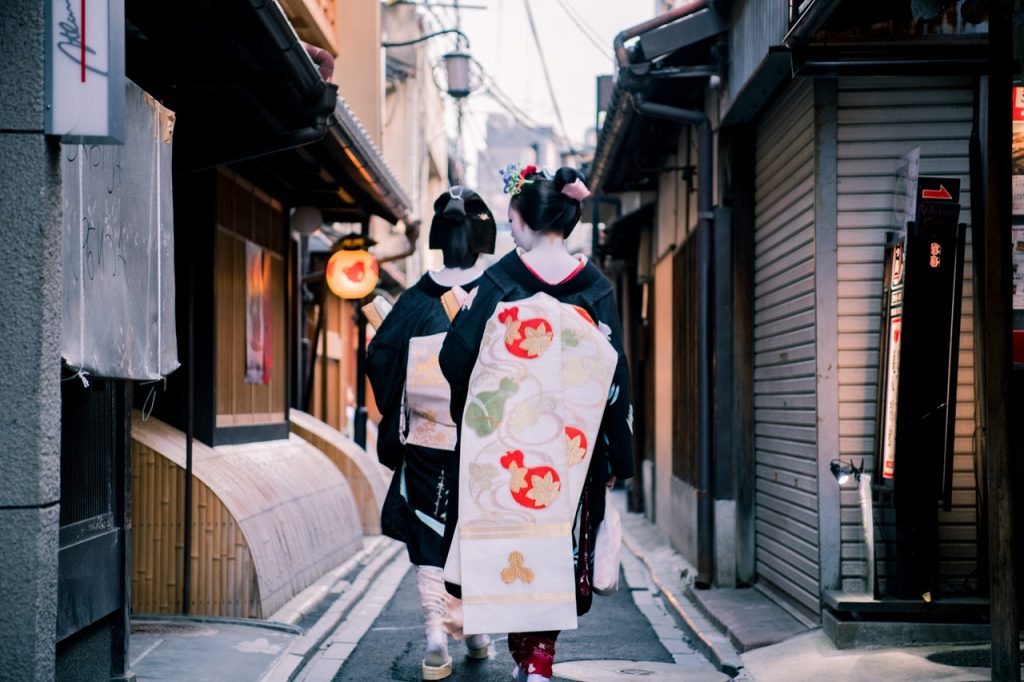 Their shoes is called Okobo. Normally 5 to 6 inches tall made of paulownia trees. Girls who are taller than 160 cm are considered too tall and can get rejected when they apply as Maiko. 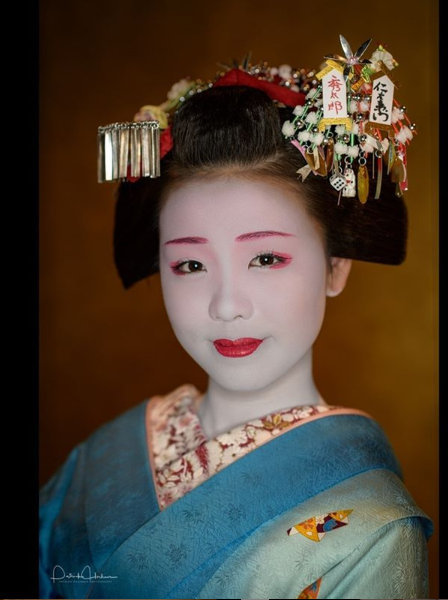 They normally wear the white foundation with thin eyebrows, hint of red eyeshadows and tiny red lips. They use bintsuke-abura as a base so the white foundation can stick to the face longer. The white foundation is called Kabuki Oshiroi (歌舞伎白粉). Kona oshiroi (粉白粉）is used on top of the foundation paste. For the lips, Maikos can only wear lipstick on a small part of their lip. They use white color as foundation as it reflects beautifully at night especially during the early days when electricity is not common and people only use candles to light up their houses.

All visible skin is painted leaving a three inverted mountain shape at the nape unpainted.

TASKS OF A MAIKO

A Maiko should undergo and successfully complete the training with their chosen Okiya.

The okiya will support them with everything including lodging, clothing, make up and food that's why the training is rigorous. The amount spent by the Okiya will be paid once the Maiko starts working in the tea houses. All her income will go directly to the okaasan and a little allowance will be given to them for daily expenses.

After they complete their training (usually lasts 5 years), the Maiko officially become a Geiko or Geisha.

WHAT IS A GEISHA? 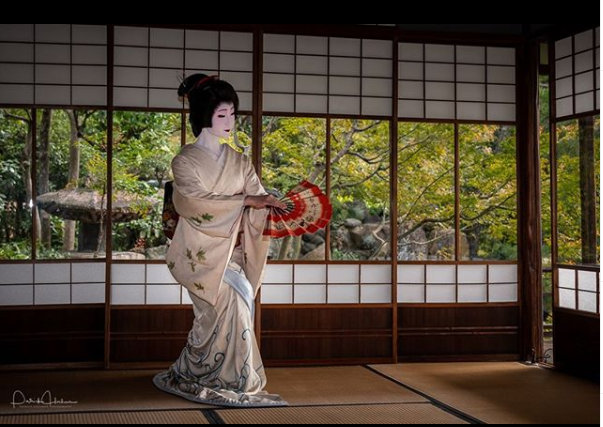 Geisha (芸者) literally means a person who is into arts, craft and performance.

Geisha and Maiko are different in many ways.

Geisha started in the 1800s when the “pleasure house” started to become more on the entertainment side of business. The first Geishas in 1700  were actually male known as Taikomochi (太鼓持ち) or drum bearer. Though not all of them use taiko or drums, they were known to tell jokes and tales to entertain the guests.

In 1750, a woman from Fukagawa identified herself as a Geisha (even though the term was used by men). She was a skilled singer who can play shamisen and thus, making geisha popular in Fukagawa, Tokyo.

As the number of female geisha rises, the number of male Taikomochi dropped. More women preferred to become geisha who are into arts instead of giving sexual favors to their guests . Geishas were forbidden to sell sex to avoid competition with the Oirans. 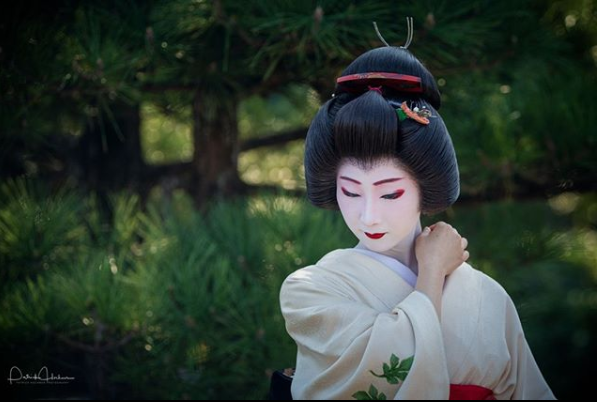 Unlike the Maiko, Geishas are allowed to wear a wig called Katsura. Small comb is added on the top.

The kimono that the Geisha wear is usually dominated by one color with minimal designs at the bottom. This symbolizes that the Maiko has grown into adulthood.Their obi is short and usually shaped like a box at their back.

Their whole face is covered with white foundation. Eyebrows is black with a hint of red. The full lips will be painted with red. Their visible skin will be painted with white leaving two inverted mountain shape area in her nape unpainted thus leaving a “mask” image of the make up. The footwear they use is called Geta (下駄). This is a wooden clog similar to a slipper but with an elevated wooden base. Sometimes, Geisha can also be seen wearing a Zori (草履). 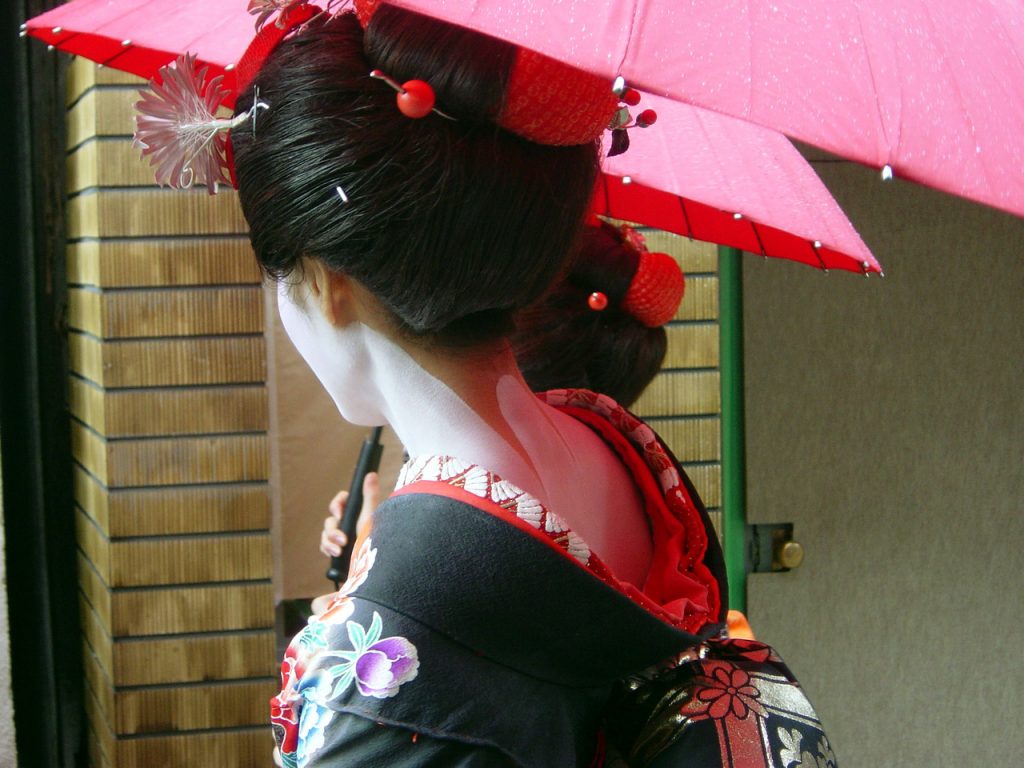 Being a Geisha has no age limit however once they get married and have a family of their own, then they need to give up being a Geisha.

TASKS OF A GEISHA

If you want to see a Geisha perform, you need to book a tea house where they are affiliated. Booking fee depends on food to be served, number of guests and number of geisha that will perform.

Geisha will perform traditional songs and dance to the guests. They are expected to keep the company of the guests while serving tea or playing games with them.

Oiran comes from the phrase oira no tokoro no nesan which translates to the lass at our place.

Oiran refers to the high ranking courtesans or sex workers in Japan during the Edo period. The highest rank of oiran is called Tayū (太夫).

Oiran is different from the regular prostitutes called yuujo (遊女).Yuujo are the girls who sit in harimise (張り見世). Harimise is a brothel for sex workers were the girls sit behind bars while the customers pick the girl they like. Oiran does not sit in harimise and instead, oiran is the one who picks their customer. An oiran should be well educated, highly trained in different skills such as chado, calligraphy, ikebana and shamisen. They are expected to be well versed and elegant.

If a customer is interested to see an Oiran, one must go through an ochaya to call their service. Before the customer can receive the service of an oiran, they had to see her 3 times and this can be very costly. In their first meet up, the oiran will sit far from the customer. She will not speak, eat or drink. She will only listen to the customer as he displays his wealth to the oiran.

In the second meeting, the Oiran would still not speak, drink or eat but she will sit closer to the customer as he once again displays his power and wealth. Oiran would then decide if the customer is worth her service.

If the customer moves on to the third  stage, then the customer must bring a chopstick to the oiran with his name engraved on it and money called najimikin (馴染み金) as payment to the oiran’s service. From this day, the customer is not allowed to see any other prostitutes. 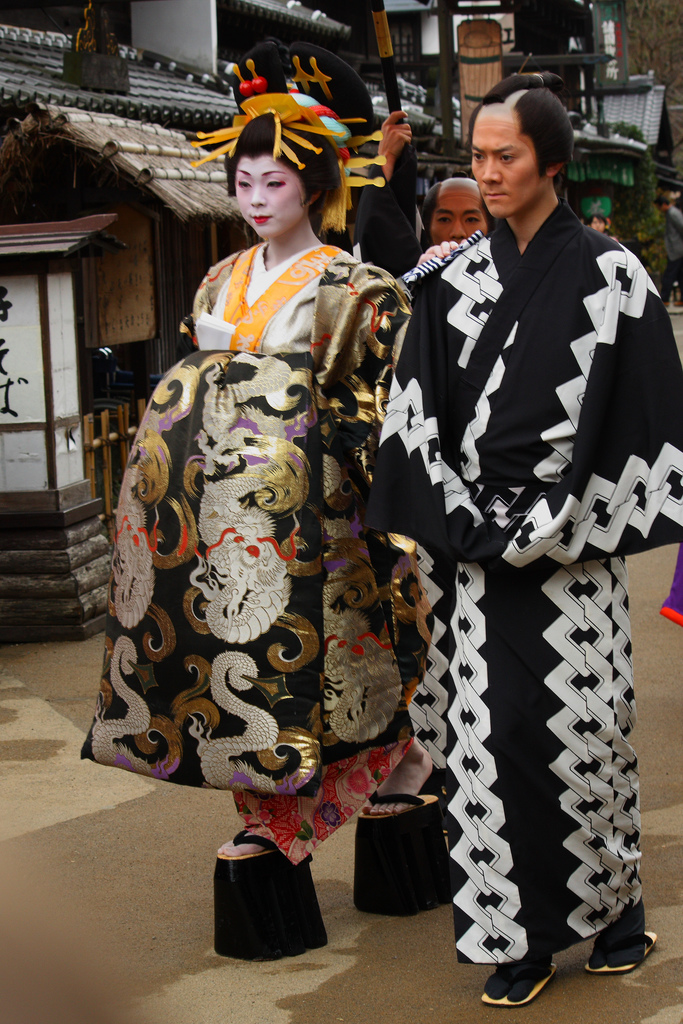 Oiran’s hairstyle is called date-hyougo. Three big knots placed on the middle, left and right side of the head with 6 to 8 hairpins attached. This can weigh up to 10 kilos.

Oiran wears layers of  kimono that is purely made out of silk and unlike the kimono that the Geisha wear, they wear loud and bold colors to attract customers.  The tayū would wear 5 layers of silk kimono and total weight can be up to 20 kilos.

Oiran wears black Geta shoes with a height of 20 cm or higher. This is to make sure that she stands out from the crowd. Also one of the notable differences between Geisha and Oiran is that Oiran does not use any socks. Showing a bit of skin is considered sensual.

Uses white foundation as well with red lips and hint of red on the sides of their eyelids.

As the popularity of Geisha rises, the competition with Oiran rises too. More people choose to avail the services of Geisha as it is more affordable for the common people and less formal. Slowly, the number of Oirans became lesser while Geisha became stronger and in 1958 prostitution was made illegal in Japan meaning Oiran can no longer perform their service.