One of main difficulties in learning Japanese might be being able to handle polite expressions properly. Why it is difficult? Because the differences between these expressions are very subtle, and in order to use them accurately, one needs to perceive whether the other person is “superior” or “inferior”. Here is some things to know. 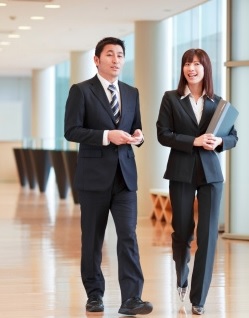 When in doubt, simply use “san”

The Japanese equivalent of “Mr” or “Ms” in English is “San”. It has to be added right after person’s name. That is obviously the main expression – the others are exceptions. But it will help you to know the differences. And if you ever want to work in Japan, it is important to learn the different Japanese honorifics (san, sama, kun, chan, dono).

Polite expressions must follow the situation and the relationships with others. When Japanese people call someone, using “sama（様）” is safe. It is the most polite and respectable way. It’s a kind of formal expression. One has to use it when doing business, writing letters, and meeting customers or guests until the relationships become “intimate”. “Dono（殿）” used to mean “Daimyo” – the leader of Samurais – therefore it implies some sort of “tension”. This expression has obviously become a bit old and is actually less polite than “sama”. “Dono” is usually used in writing by senior or upper person (e.g. boss). Sometimes companies call their employees  “dono” but it is not so common anymore.

As mentioned above, “san” is also a polite way to call one another. It can be used easily. In fact, it is the most commonly used form between colleagues and senior persons, as well as “equivalent-level” relationships. “San” is the most convenient expression and the safest way when someone wants to show his (light) sense of respect. Using “San” expresses one's caring for others. Therefore, it is recommended to use “San” in any type of situations.

“Kun(君)” is usually used for boys, especially the younger ones. On the contrary, “Chan” is for girls. But the nuance is quite different. While “kun” implies some kind of “tension” because it is for boys – like ”dono” -, “Chan” is much tenderer, more intimate, and has a little bit of a “funny” feeling attached to it. So very close friends use “Chan” to call each other even if they are boys.

On the other hand, the worst manner is to call someone without any title. That is called “yobisute (呼び捨て)”. “Yobisute” is vulgar but close and old friends usually use it. It’s an impolite expression but, at the same time, it shows closeness. So some people prefer to be called by “yobisute”. Young people, in particular, do.

Sense of politeness is key to understand not only the Japanese culture, but also the whole Far East cultural area – China, Korea, and Vietnam. These countries were all influenced by Confucian ideas. That sense of respect is a fundamental element in socialization. Like engine oil that runs social relationship smoothly. In Japan, in order to be admitted by others as a mature adult, one has to discern polite expression correctly. The whole process isn’t easy so it became traditional value of Japan.